Eucalyptus cambageana, commonly known as the Dawson River blackbutt, Dawson gum or Coowarra box, is a species of tree that is endemic to Queensland, Australia. It is a medium-sized tree with hard, rough bark on the lower trunk, smooth white to cream-coloured bark above, lance-shaped or curved adult leaves, flower buds in groups of seven, white flowers and cup-shaped to funnel-shaped fruit. 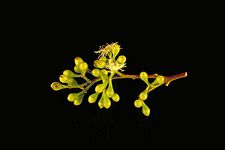 Eucalyptus cambageana was first formally described in 1913 by Joseph Maiden described from a specimen collected in 1912 from Mirtna Station near Charters Towers. The specific epithet (cambageana) honours surveyor and botanist Richard Hind Cambage.

Dawson River blackbutt is found from near Charleville, Charters Towers and Jericho to the coast of Queensland. It grows in scrubland or open woodland with brigalow (Acacia harpophylla), belah (Casuarina cristata), and wilga (Geijera parviflora). These open woodland communities where it is co-dominant with brigalow are found on clay, alluvial, or sedimentary soils.

The presence of E. cambageana is an indicator of sodic soil, which has implications for agriculture in the region.

This eucalypt is classed as "least concern" under the Queensland Government Nature Conservation Act 1992.

The heavy reddish-brown timber of this eucalypt is used for fence posts in the local area. It grows into too large a tree for gardens in general, but its contrasting bark give it horticultural potential for parks and acreage.

All content from Kiddle encyclopedia articles (including the article images and facts) can be freely used under Attribution-ShareAlike license, unless stated otherwise. Cite this article:
Eucalyptus cambageana Facts for Kids. Kiddle Encyclopedia.