Eucalyptus cooperiana, commonly known as the many-flowered mallee, is a species of mallee that is endemic to an area along the south coast of Western Australia. It is described as being "of striking appearance by reason of its smooth, white bark and acutely angled branchlets". It has lance-shaped adult leaves, flower buds in groups of between nine and thirteen or more, creamy yellow flowers and urn-shaped fruit. 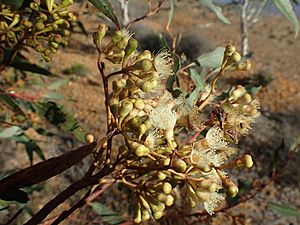 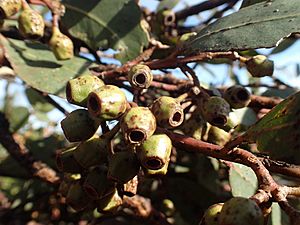 Eucalyptus cooperiana was first formally described by the botanist Ferdinand von Mueller in 1880 as part of the work Fragmenta Phytographiae Australiae. The type specimen was collected by George Maxwell. The specific epithet (cooperiana) honours Ellwood Cooper, a Californian horticulturalist, who introduced many species of Eucalyptus to the United States and wrote Forest Culture and Eucalyptus trees.

The many-flowered mallee is found on sand plains along south coast of Western Australia between Esperance and Israelite Bayin the Goldfields-Esperance region where it grows in sandy-clay soils over limestone.

This eucalypt is classified as "not threatened" by the Government of Western Australia Department of Parks and Wildlife.

All content from Kiddle encyclopedia articles (including the article images and facts) can be freely used under Attribution-ShareAlike license, unless stated otherwise. Cite this article:
Eucalyptus cooperiana Facts for Kids. Kiddle Encyclopedia.