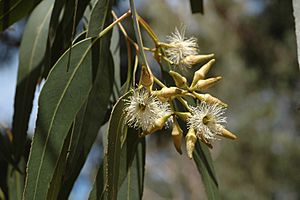 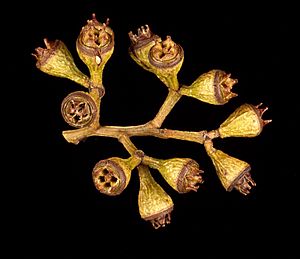 Some other ironbarks occurring in the same area including E. siderophloia, E. rhombica and E. decorticans are similar but all have smaller buds and fruit, and a much shorter operculum than that of E. fibrosa.

Eucalyptus fibrosa was first formally described in 1859 by Victorian state botanist Ferdinand von Mueller in 1859 from a collection from the Brisbane River and the description was published in Journal and Proceedings of the Linnean Society, Botany. The specific epithet (fibrosa) apparently refers to the bark, although possibly an inappropriate name for an ironbark.

In 1962, Lawrie Johnson and Robert Anderson described two subspecies and the names have been accepted by the Australian Plant Census:

Red ironbark grows in forest on shallow, relatively infertile soil. It is widespread on the coast, tablelands and nearby inland areas from near Rockhampton in Queensland to Moruya in New South Wales.

This species is listed as "least concern" under the Queensland Government Nature Conservation Act 1992.

All content from Kiddle encyclopedia articles (including the article images and facts) can be freely used under Attribution-ShareAlike license, unless stated otherwise. Cite this article:
Eucalyptus fibrosa Facts for Kids. Kiddle Encyclopedia.