Eucalyptus langleyi, commonly known as the green mallee ash or albatross mallee, is a species of mallee that is endemic to a small area of New South Wales. It has mostly smooth grey to yellowish bark, lance-shaped to curved adult leaves, flower buds in groups of seven, white flowers and cup-shaped to barrel-shaped fruit. 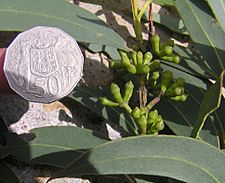 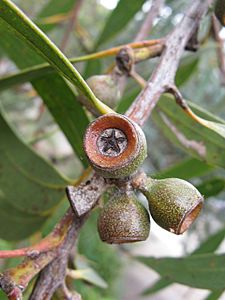 Eucalyptus langleyi was first formally described in 1991 by Lawrie Johnson and Donald Blaxell from a specimen collected by Blaxell near Yalwal Road, Nowra and the description was published in the journal Telopea. The specific epithet (langleyi) honours "Lawrence Langley of Robertson" who drew the authors' attention to the species.

The green mallee ash grows in mallee shrubland in shallow, sandy soil over sandstone. It is only known from two stands south-west of Nowra.

This malled is listed as "vulnerable" under the Australian Government Environment Protection and Biodiversity Conservation Act 1999 and the New South Wales Government Biodiversity Conservation Act 2016. The population occurring north of the Shoalhaven River contained 32 plants in 1998, but a survey ten years later found only 20 of them still alive. This population is listed as "critically endangered" under the New South Wales Act. The main threats to the species are residential and recreational development and by road, trail and pipeline maintenance. In 2000, three clumps of trees were destroyed during gas pipe line constructions and others were covered in debris.

All content from Kiddle encyclopedia articles (including the article images and facts) can be freely used under Attribution-ShareAlike license, unless stated otherwise. Cite this article:
Eucalyptus langleyi Facts for Kids. Kiddle Encyclopedia.