Eucalyptus macrorhyncha, commonly known as the red stringybark, is a species of medium-sized tree that is endemic to eastern Australia. It has rough, stringy, grey to brown bark, lance-shaped adult leaves, flower buds in groups of between seven and eleven, white flowers and hemispherical fruit. 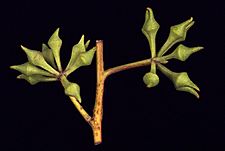 Near Bundarra and Barraba, this species is difficult to distinguish from E. laevopinea.

Eucalyptus macrorhyncha was first formally described in 1867 by George Bentham based on specimens collected by Frederick Adamson and by Ferdinand von Mueller who gave the species its name and wrote an unpublished description. The formal description was published in Flora Australiensis.

In 1973, Lawrie Johnson and Donald Blaxell changed the name of Eucalyptus cannonii to E. macrorhyncha subsp. cannonii and the names of the two subspecies are accepted by the Australian Plant Census:

Red stringybark occurs on ranges and tablelands of New South Wales, the Australian Capital Territory and Victoria, with a small, disjunct population in the Spring Gully Conservation Park south-west of Clare in South Australia.

All content from Kiddle encyclopedia articles (including the article images and facts) can be freely used under Attribution-ShareAlike license, unless stated otherwise. Cite this article:
Eucalyptus macrorhyncha Facts for Kids. Kiddle Encyclopedia.