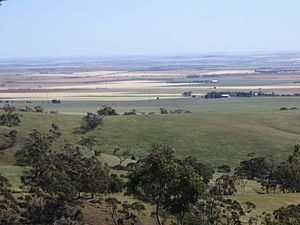 View to the west from Spring Gully CP

Spring Gully Conservation Park, formerly the Spring Gully National Park), is a protected area located in the Australian state of South Australia in the localities of Sevenhills and Spring Gully about 6 kilometres (3.7 mi) south of the town centre in Clare.

In 1980, the conservation park was described as follows:

This park preserves the only stand of red stringybark (Eucalyptus macrorhyncha) in South Australia. It is a relic population left behind from a wetter time, the nearest populations occurring near Dubbo in New South Wales and Cape Otway in Victoria. Fine views over the plains to the west can be seen from this park which is used by locals as a picnic area…

Spring Gully is situated on a western ridge of the northern Mount Lofty Ranges, approximately 15km south of Clare. It has an open forest association dominated by Eucalyptus macrorhyncha on its upper slopes, particularly in the northern portion and has been cleared in its southern portion. Blackboys (Xanthorrhoea sp.) occur in the more open areas. Western grey kangaroos and euros occur in the ranges here…

Approximately a quarter of the park is cleared land…

The flora of the conservation park includes Caladenia argocalla (white beauty spider orchid), a species listed both nationally and at state level as "endangered".

Thousands of the red stringybark trees died following the very dry period from mid-2007 to early 2008 and the record heat-wave of March 2008. The leaves of others died, while the trees survived and later produced epicormic shoots; as of mid-2009 many of these had also died. An apparently small section of the conservation park (20ha) was burned in a lightning-ignited bushfire on 20 November 2009, further stressing some of the trees.

A portion of the Riesling Trail known as the Spring Gully Loop passes along the northern side of the conservation park.

The conservation park is classified as an IUCN Category III protected area. In 1980, it was listed on the now-defunct Register of the National Estate.

All content from Kiddle encyclopedia articles (including the article images and facts) can be freely used under Attribution-ShareAlike license, unless stated otherwise. Cite this article:
Spring Gully Conservation Park Facts for Kids. Kiddle Encyclopedia.