Euchaetes egle, the milkweed tiger moth or milkweed tussock moth, is a moth in the family Erebidae and the tribe Arctiini, the tiger moths. The species was first described by Dru Drury in 1773. It is a common mid- through late-summer feeder on milkweeds and dogbane. Like most species in this family, it has chemical defenses it acquires from its host plants, in this case, cardiac glycosides (Weller et al., 1999). These are retained in adults and deter bats, and presumably other predators, from feeding on them (Hristov and Conner 2005). Only very high cardiac glycoside concentrations deterred bats, however (Hristov and Conner 2005). Adults indicate their unpalatability with clicks from their tymbal organs (Simmons and Conner 1996).

It is found from southern Canada and south through Texas and Florida in North America (Wagner 2005).

There is one generation per year in the north and two or more in the south (Wagner 2005).

Females lay eggs in masses on the undersides of leaves.

Early instars appear slightly hairy and gray. They skeletonize whole leaves gregariously, leaving lacy leaf remnants. They are gregarious until their third instar. Later instars sport tufts of black, white and orange (sometimes yellow) setae (hairs). The head capsule is black. The later instars wander much more, and may appear alone or in groups of 2 to 10. Mature caterpillars occur from June onwards (Wagner 2005). Larvae grow as long as 35 mm. 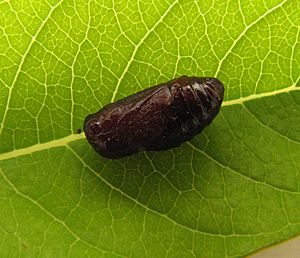 The gray cocoon is felted, with hairs from the larvae, and overwinters (Wagner, 2005).

Wings are grayish. Abdomens are hairy and yellow, each with a row of black dots on its dorsum. Males use their tymbal organs in calling females and in defense against bats (Simmons and Conner, 1996).

Dogbanes and milkweeds produce a sticky latex that can impede larval feeding. Early instars avoid the veins by skeletonizing the leaves. Older larvae sever the veins that supply the latex, which reduces latex flow to the area they feed on (Dussourd and Denno, 1991).

All content from Kiddle encyclopedia articles (including the article images and facts) can be freely used under Attribution-ShareAlike license, unless stated otherwise. Cite this article:
Euchaetes egle Facts for Kids. Kiddle Encyclopedia.