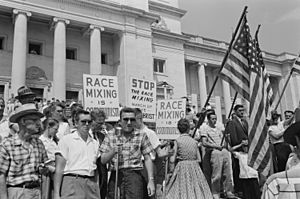 In Little Rock in the 1950s, protesters claimed their opinions were widely shared in the US. Their belief was an example of the effect of the false consensus.

False consensus or the effect of the false consensus is the tendency for people to assume that everyone else thinks the same way they do.

It is a cognitive bias in which a person overestimates the "agreement grade" that the other people have with them. In other words, people tend to think that others agree with them. Most of the time, a person thinks that their own attitudes, beliefs, values and habits are the most common ones. In reality, the person's thoughts may not be shared by others.

All content from Kiddle encyclopedia articles (including the article images and facts) can be freely used under Attribution-ShareAlike license, unless stated otherwise. Cite this article:
False consensus Facts for Kids. Kiddle Encyclopedia.