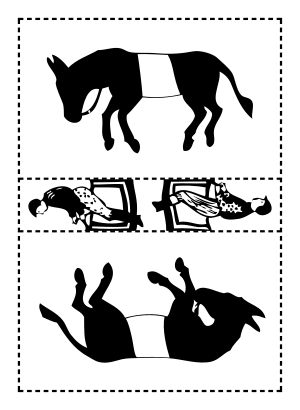 Sam Loyd's Famous Trick Donkeys puzzle. The solver must cut out the three rectangles and reassemble the pieces so that the two jockeys appear to be riding the two donkeys.

The printed card of the puzzle shows two donkeys, the central part of which has been left blank on purpose. The third part of the card are the riders, and the objective of the puzzle is to arrange the three pieces (the two donkeys and the riders) so the riders are mounting the donkeys.

In the 1857 version of the book The Magician's Own Book or the Whole Art of Conjuring there appears a picture of two dogs laying on the ground facing opposite sides. Called "The Dead Dog Puzzle" the objective was to draw 2 lines which make the dogs seem to be alive, instead of lying in the ground. In 1939 another variation of the puzzle was found as a prize of a popcorn company in their packages, the puzzle showed two mules and two cowboys. This time the mechanics of the game were the same as Sam Loyd's, other companies used a tiny card with this puzzle as a gift, like the Hotel Wellington in Albany in the 50s.

Today, many puzzle and mind-teasers websites offer the puzzle as an online game or a print-friendly version of it.

All content from Kiddle encyclopedia articles (including the article images and facts) can be freely used under Attribution-ShareAlike license, unless stated otherwise. Cite this article:
Famous Trick Donkeys Facts for Kids. Kiddle Encyclopedia.