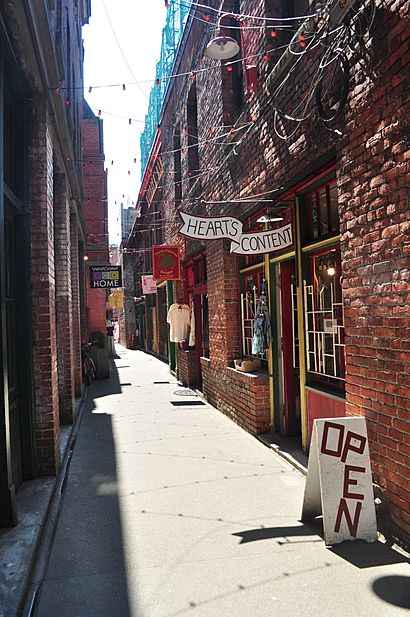 View looking south from near where the Fan Tan Alley narrows on its north (by Fisgard Street), looking toward Pandora Avenue.

Fan Tan Alley (番攤里) is an alley in the Chinatown neighbourhood of Victoria, British Columbia, Canada. It runs south from Fisgard Avenue to Pandora Avenue at the block between Government Street and Store Street. Today it is a tourist destination with many small shops including a barbershop, art gallery, Chinese cafe, apartments and offices. It is the narrowest street in Canada. At its narrowest point it is only 0.9 meters (35 in) wide. It was designated as a heritage property by the local government in 2001.

In 2006, Dr. David C. Lai, a scholar and historian of the area, contributed material salvaged from the alley's original gate to the Six String Nation project. Part of that material now serves as kerfing on the upper left of the interior of Voyageur, the guitar at the heart of the project.

The alley can briefly be seen the 1990 movie "Bird on a Wire (film)" in a scene where actor Mel Gibson drives a motorcycle down the ally.

All content from Kiddle encyclopedia articles (including the article images and facts) can be freely used under Attribution-ShareAlike license, unless stated otherwise. Cite this article:
Fan Tan Alley Facts for Kids. Kiddle Encyclopedia.