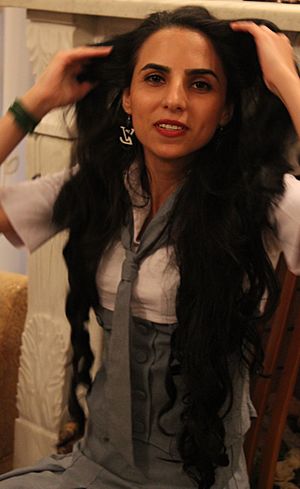 Fatemeh Ekhtesari (Farsi: فاطمه اختصاری )(born 1984 or 1985) is a poet from Iran. She is known for poems about Iranian women.

Fatemeh Ekhtesari was arrested with Mehdi Mousavi in 2013. They were put in solitary confinement and interrogated. In January 2015, they were released on bail. Ekhtesari received a prison sentence of 11½ years and 99 lashes.

Ekhtesari's writing was approved by the Ministry of Islamic Guidance. However, Ekhtesari said she shook hands with male participants at a poetry event in Sweden. This is illegal in Iran. Ekhtesari made the statement during interrogation, but during the trial, she denied the charges.

More than 100 poets signed a letter asking for a pardon. In 2016, Ekhtesari and Musavi escaped from Iran.

All content from Kiddle encyclopedia articles (including the article images and facts) can be freely used under Attribution-ShareAlike license, unless stated otherwise. Cite this article:
Fatemeh Ekhtesari Facts for Kids. Kiddle Encyclopedia.