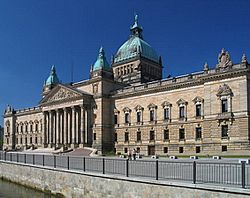 Seat of the Federal Administrative Court of Germany: the former Reichsgericht building in Leipzig

The Bundesverwaltungsgericht or Federal Administrative Court is one of the five federal supreme courts of Germany. It is the federal court of appeals for generally all cases of administrative law. These cases are mainly arguments between people and the government, but sometimes are disputes between two different parts of government.

The Federal Administrative Court was set up on 8 June 1953. It was based in Berlin, but in 2002 moved to the city of Leipzig in Saxony.

Although cases about social security law and tax law are arguments between a person and the government, there are special courts for these matters. The Bundessozialgericht is federal court of appeals for social security law, cases about tax and customs law are decided by the Finanzgerichte (Finance Courts), and lastly by the Bundesfinanzhof.

The Bundesverwaltungsgericht has its headquarters at the former Reichsgericht (Reich Court of Justice) building in Leipzig.

All content from Kiddle encyclopedia articles (including the article images and facts) can be freely used under Attribution-ShareAlike license, unless stated otherwise. Cite this article:
Federal Administrative Court of Germany Facts for Kids. Kiddle Encyclopedia.