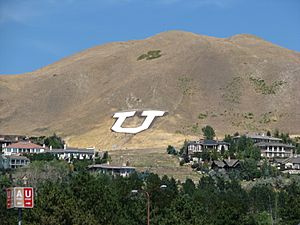 The "Block U" has overlooked the University of Utah from Federal Heights since 1907.

The name "Federal Heights" originates from the period between the Mormon settlers' establishment of Salt Lake City in 1847 and Utah's admittance to the United States as a state in 1896. During this period of time, the Federal Government of the United States established Fort Douglas in the foothills of the Wasatch Mountains above Salt Lake City (not far from the present-day neighborhood) in order to keep an eye on the settlers. Through the efforts of Utah's U.S. Senator Thomas Kearns (1901-1905), Fort Douglas became a regimental post. The officers of the fort established their homesteads to the north-east, creating the Federal Heights neighborhood.

It gained notoriety when Elizabeth Smart disappeared from the neighborhood on June 5, 2002, and was later rescued (March 12, 2003) from her abductors, two homeless adults known as Brian David Mitchell and Wanda Ileen Barzee.

All content from Kiddle encyclopedia articles (including the article images and facts) can be freely used under Attribution-ShareAlike license, unless stated otherwise. Cite this article:
Federal Heights, Salt Lake City Facts for Kids. Kiddle Encyclopedia.