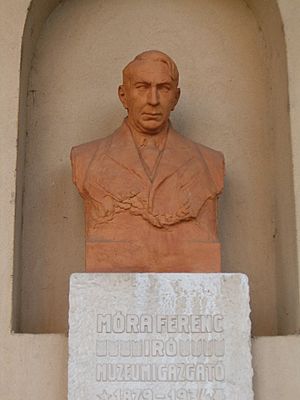 Ferenc Móra was born in Kiskunfélegyháza, into a financially poor family. His father Márton Móra was a tailor, and his mother Anna Juhász was a baker. He acquired his formal education under the most extreme hardships because of the financial poverty of his family. At the Budapest University he earned the degree of Geography and History education but worked as a teacher only for one year at Felsőlövő, Vas county. He was a prominent figure of youth literature in Hungary. His parallel career of museology started in 1904 at the combined library and museum of Szeged serving the county capital of Szeged and its surrounding Csongrád county. He was appointed as the director of the combined library and museum of Szeged and Csongrád county in 1917 and served in that post as director until 1934, when he died, aged 54, at Szeged. Today the museum is named in his honor as the "Móra Ferenc Muzeum" which can be seen on the internet at many websites. 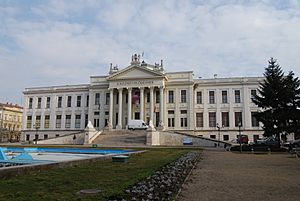 All content from Kiddle encyclopedia articles (including the article images and facts) can be freely used under Attribution-ShareAlike license, unless stated otherwise. Cite this article:
Ferenc Móra Facts for Kids. Kiddle Encyclopedia.