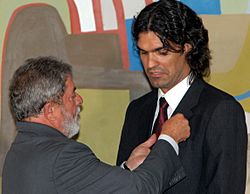 Fernandão with President Lula in 2007.

Fernandão first played for Goiás, before moving to France to play for Olympique de Marseille. While playing for Marseille, he was loaned to Toulouse. He later returned to Brazil to play for Internacional from 2004 until 2008. He soon played in Qatar for Al-Gharafa. In 2009, he returned to Goiás for a season. He played his final season for São Paulo in 2010/11. He also played for the national team for one match in 2005. For four months in 2012, he coached Internacional with very little success.

Fernandão was one of five people killed in a helicopter crash on 7 June 2014 in Aruanã, Goiás. He was 36 and died less than a week before the 2014 FIFA World Cup in Brazil. His wife, Fernanda Costa, and his two twin sons, Eloa and Enzo, outlived him.

All content from Kiddle encyclopedia articles (including the article images and facts) can be freely used under Attribution-ShareAlike license, unless stated otherwise. Cite this article:
Fernandão Facts for Kids. Kiddle Encyclopedia.