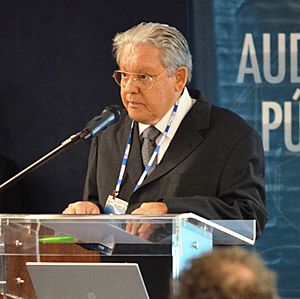 Fernando Rocha Brant (9 October 1946 – 12 June 2015) was a Brazilian poet, lyricist and journalist. He was best known for his partnership with singer-songwriter and guitarist Milton Nascimento. This resulted in over 200 songs recorded by the most respected artists in Brazil. He was born in Caldas, Minas Gerais.

Brant died from problems caused by a second liver transplant on 12 June 2015 in Belo Horizonte. He was 68.

All content from Kiddle encyclopedia articles (including the article images and facts) can be freely used under Attribution-ShareAlike license, unless stated otherwise. Cite this article:
Fernando Brant Facts for Kids. Kiddle Encyclopedia.