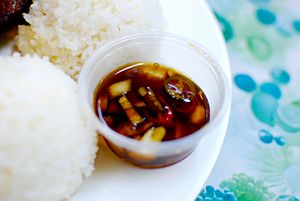 Fina'denne' (many alternate spellings, commonly finadene, fina'denni', or fina'dene) is a spicy all-purpose condiment that is a staple in Chamorro cuisine. In the Chamorro language, it translates as "made with chili pepper." It may be spooned over the meat dish or rice, or used in a separate small dipping bowl. Anthropologists to Guam in the early 20th century noted the frequent use of fina'denne' by Chamorros. 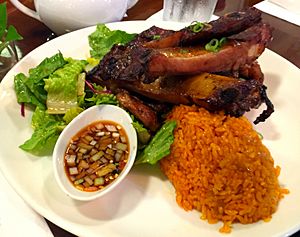 There are many historical and contemporary versions of fina'denne'. The earliest fina'denne', predating Spanish colonization in the late seventeenth century, was simply salt and pepper. Filipino immigants during the Spanish period introduced the technique of tapping coconut trees and fermenting the sap to make tubâ vinegar. The fina'denne' of this time was made with tubâ, salt, lemon, water, and fresh pepper. The Japanese subsequently introduced soy sauce to the Mariana Islands, resulting in the typical contemporary version of fina'denne' with soy sauce, lemon juice, onion, and fresh bird's eye chili, known locally as "boonie peppers." The acidic ingredient may also be white vinegar, cidar vinegar, coconut vinegar, or lime.

All content from Kiddle encyclopedia articles (including the article images and facts) can be freely used under Attribution-ShareAlike license, unless stated otherwise. Cite this article:
Fina'denne' Facts for Kids. Kiddle Encyclopedia.