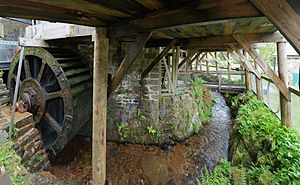 One of Finch Foundry's water wheels

Finch Foundry is a 19th-century water-powered forge situated in the village of Sticklepath near Okehampton, Devon, England. It was originally used to produce agricultural and mining hand tools and at its peak produced around 400 edge-tools a day. It remained an active foundry until 1960 when the roof collapsed and has been a National Trust property since 1994. It contains examples of a tilt hammer, drop hammer, and shear hammer all powered by water wheels. The Trust maintains the forge in working order and demonstrations of the tools are given.

All content from Kiddle encyclopedia articles (including the article images and facts) can be freely used under Attribution-ShareAlike license, unless stated otherwise. Cite this article:
Finch Foundry Facts for Kids. Kiddle Encyclopedia.