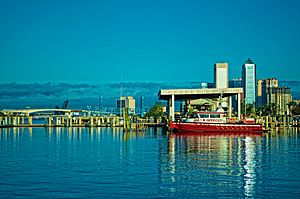 The Jake M. Godbold moored on the St Johns River in Jacksonville.

During the 1999-2001 period Jacksonville fireboats were called for water rescues on 486 occasions. They were called to fight fires 193 times.

In 1922 the city commissioned the John C. Callahan as its first fireboat.

All content from Kiddle encyclopedia articles (including the article images and facts) can be freely used under Attribution-ShareAlike license, unless stated otherwise. Cite this article:
Fireboats of Jacksonville, Florida Facts for Kids. Kiddle Encyclopedia.