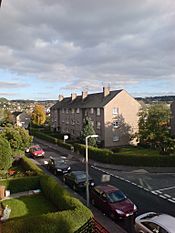 Firrhill is a suburb of Edinburgh, the capital of Scotland. It is south of Merchants of Edinburgh Golf Club and lies next to Oxgangs.

The area is mostly made up of public housing which was built by the Corporation Housing Department in the mid-1950s, however most of the council properties have now been bought by tenants using the right to buy scheme although a fairly large number of these are rented out privately by individual landlords.

All content from Kiddle encyclopedia articles (including the article images and facts) can be freely used under Attribution-ShareAlike license, unless stated otherwise. Cite this article:
Firrhill Facts for Kids. Kiddle Encyclopedia.