Fish in Australia facts for kids

Australia has over 5000 described species of fish, a quarter of which are endemic. Seafood and aquaculture are major and highly regulated industries, and fishing for marine and freshwater native fish is popular. 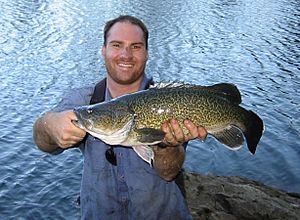 For its land-size, Australia has a low diversity of native freshwater fish with only 281 described species. This is largely because Australia is a very dry continent with sporadic rainfall and large areas of desert.

The most common freshwater fish are:

All content from Kiddle encyclopedia articles (including the article images and facts) can be freely used under Attribution-ShareAlike license, unless stated otherwise. Cite this article:
Fish in Australia Facts for Kids. Kiddle Encyclopedia.