The Fishing Lakes are a chain of four lakes in the Qu'Appelle Valley cottage country some 40 miles (64 km) to the northeast of Regina, Saskatchewan. 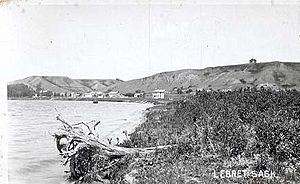 The perimeters of Pasqua, Echo, Mission and Katepwa Lakes are the location of several provincial parks, public swimming beaches and are — not public property or aboriginal reserves — intermittently built up with private cottages and youth summer camps. They are fed by the Qu'Appelle River, by underground aquifers and by numerous creeks flowing through coulees that open into the valley. There is a fifth lake - Lake Muscowpetung - that is directly west of Pasqua Lake and is significantly smaller than the other lakes, so most people don't know about it and it is often not considered one of the Fishing Lakes. 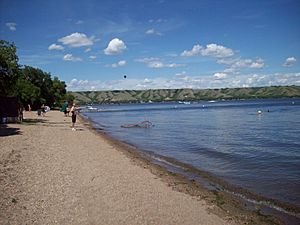 Because the flow of water through the lakes is very sluggish — the Qu'Appelle river is little more than a small creek at this point in the Valley — and because the runoff from the surrounding farmland contains large amounts of farm fertilizer, the lakes have since the middle of the 20th century been subject to severe attacks of algae as summer draws on. Often by August each year the beaches cannot be used for swimming and those who wish to swim must go to deeper water by boat.

Fort Qu'Appelle, between Echo and Mission Lakes, was originally a Hudson's Bay Company trading post; the original factor's buildings are maintained as a museum. 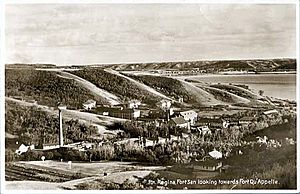 There has been some inclination by would-be tourism-promotion elements to rename the Fishing Lakes as the "Calling Lakes" in order further to stress the legend of the Qu'Appelle Valley as popularised at the turn of the 20th century by E. Pauline Johnson. The effort has met with resistance from historically minded locals with authentic roots in the locale and has not thus far met with success.

Notable locales on the Fishing Lakes include: 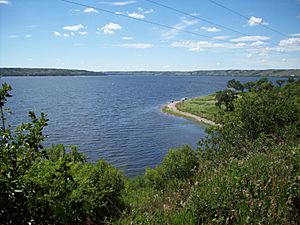 All content from Kiddle encyclopedia articles (including the article images and facts) can be freely used under Attribution-ShareAlike license, unless stated otherwise. Cite this article:
Fishing Lakes Facts for Kids. Kiddle Encyclopedia.