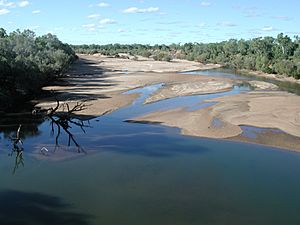 Fitzroy Crossing is a small town in the Kimberley region of Western Australia, 400 kilometres (250 mi) east of Broome and 300 kilometres (190 mi) west of Halls Creek. It is approximately 2,524 kilometres (1,568 mi) from the state capital of Perth.

It is 114 metres (374 ft) above sea level and is situated on a low rise surrounded by the vast floodplains of the Fitzroy River and its tributary Margaret River. In 2011 the population of the Fitzroy Crossing town-site was approximately 1,144, with a further 2,000 or so people living in up to 50 Aboriginal communities scattered throughout the Fitzroy Valley. About 80% of the Fitzroy Valley population were Indigenous Australians with a split of closer to 60/40 (indigenous/non-indigenous) in the townsite. Tourism, cattle stations and mining are the main industries in the area.

Fitzroy Crossing and the lands and valleys around it were the home for a number of Aboriginal language groups. When Fitzroy Crossing was established the main group was the Bunuba People, their land stretching from the present day Brooking Springs and Leopold Downs Station to the Oscar, Napier and King Leopold Ranges. The Bunuba are the River and Hill people.

Another group in the area stretching on the other side of the Fitzroy River from Gogo, Fossil Downs and Louisa Downs Station and on either side of the Margaret River, are the Gooniyandi People. The plains Aboriginal people are the Nyigina and further south are the Walmajarri, the people of the Great Sandy Desert.

One of the first European explorers of the Kimberly area was Alexander Forrest and his party in 1879, following the Fitzroy River to its junction with the Margaret River at Geikie Gorge. The party then travelled east as far as Darwin. Following this exploration, around 1882, the first sheep stations were established around the mouth of the Fitzroy and the next couple of years saw the stations move out west with Noonkanbah and Quanbun opening up in 1886.

The area was finally settled in 1886 by Dan MacDonald when he set up the Fossil Downs cattle station. This was following a three-year, 3,500 mile trek from Goulburn, New South Wales.

Fitzroy Crossing received its first bridge in 1935; which was built up into a more substantial structure in 1958. However this bridge could be closed for months during the monsoonal summer. In 1974 a new bridge was built 3 kilometres (2 mi) south of the crossing which moved the focus of the settlement from its original site.

Prone to occasional flooding, the town was inundated in 2002 and 2011 following heavy rain events in the region.

In 2009 the only grocery store in the town was demolished after fire destroyed it. A new shopping centre was built and opened in 2011.

The local high school was closed for two days in 2014 after four children, three of whom were under the age of ten, extensively vandalised the school twice in a week causing over A$50,000 worth of damage.

Bayulu Community is nearby 12 km southeast along Great Northern Highway on Gogo Station.

Fitzroy Crossing Serves as the hub for the communities of the Fitzroy Valley. Many residents come into town for recreational activities such as fishing and sports at the recreation center, shopping (mainly for groceries), visiting family & meetings or appointments with the hospital or other government agency's. Fitzroy Crossing is also the home to many regional service providers as it is a central location to these community's.

Fitzroy Crossing also has a Swimming Pool, Undercover Basketball Courts, Grassed Aussie Rules Football Oval and many grassed areas around the town for use of the public.

From 1951 to 1955, S Preston Walker, a missionary with the United Aborigines Mission (UAM) on loan to the Department of Native Affairs, WA, opened up a novel Fitzroy Crossing Feeding Depot-Mission which was handed back to the Junjuwa Community in February 1987. He and other UAM missionaries set up a basic school, a health centre and store which was later taken over by the WA government and expanded to where it is today (2008).

In February 2008, a Coronial inquest described the living conditions for Aboriginal people in the Fitzroy Crossing area as "a national disaster with no disaster response". Though the coroner noted a co-ordinated government response to the problems of Fitzroy Crossing to be lacking, local leaders have taken some action. In 2007, a restriction on alcohol sales was campaigned for by members of the indigenous population: early indications suggest the restrictions have been positive for the town. The Rudd Federal government announced in mid-April 2008 that it supported the continuation of the alcohol ban beyond its expiry date of 23 May 2008, citing that the alcohol ban has led to:

In its 2008–09 budget, the Department of Social Services continued financial management support services for welfare payment reform to support a child protection trial in Fitzroy Crossing. Alcohol was being bought instead of educating children. This aid in managing money is meant to assist people with financial difficulties to get involved in the community and plan for the long term.

In 2012–13 and 2013–14, the Department of Social Services set up community projects in Fitzroy Crossing.

Fitzroy Crossing has a climate that is in transition between monsoonal and semi arid. The climate is very hot, with the average maximum temperature ranging from 30 °C (86 °F) in July to 41 °C (106 °F) in November. The highest temperature was recorded on 1 January 1969, when it reached 47.9 °C (118.2 °F). The lowest minimum was recorded on 27 June 1971, when the temperature dipped to 0.6 °C (33.1 °F). Most of the rainfall occurs in between December and March (summer/early autumn). April through to October are dry, although cooler (autumn, winter and early spring).

All content from Kiddle encyclopedia articles (including the article images and facts) can be freely used under Attribution-ShareAlike license, unless stated otherwise. Cite this article:
Fitzroy Crossing, Western Australia Facts for Kids. Kiddle Encyclopedia.