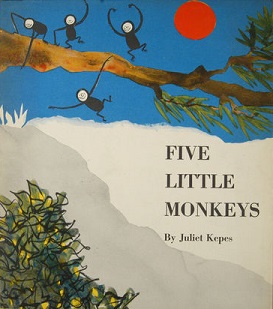 Five Little Monkeys is a book by Juliet Kepes, published in 1952, which won her a Caldecott Honor citation in 1953, as well as other awards from the Museum of Modern Art, the American Institute of Graphic Artists, and the Society of Illustrators. The New York Times cited her books four times among the ten best children's books of the year.

The book is about five little monkeys named Buzzo, Bibi, Binki, Bulu and Bali that are wild and have a bad reputation among the rest of the animals. They regain the favor of the other animals because they were brave and captured the terrible tiger of the story, later becoming heroes.

All content from Kiddle encyclopedia articles (including the article images and facts) can be freely used under Attribution-ShareAlike license, unless stated otherwise. Cite this article:
Five Little Monkeys (book) Facts for Kids. Kiddle Encyclopedia.