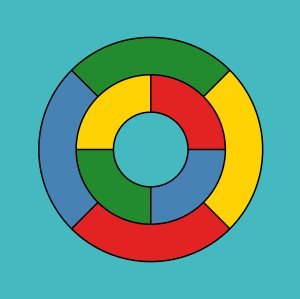 A map with five colors.

The Five color theorem is a theorem from Graph theory. It states that any plane which is separated into regions, such as a map, can be colored with no more than five colors. It was first stated by Alfred Kempe in 1890, and proved by Percy John Heawood eleven years later. Kempe also tried to prove it, but his proof failed. There are two restrictions which are placed on the maps: First, a country must be contiguous, there must be no exclaves, and secondly, countries that only touch in one point can be colored with the same color.

There is also a four color theorem, which is stronger, and much more difficult to prove.

All content from Kiddle encyclopedia articles (including the article images and facts) can be freely used under Attribution-ShareAlike license, unless stated otherwise. Cite this article:
Five color theorem Facts for Kids. Kiddle Encyclopedia.