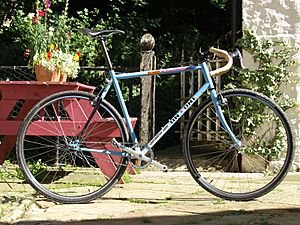 A fixed-gear bicycle (also called a "fixie") is a bicycle that has no freewheel mechanism (allowing pedals to stay still while moving).

It is a dangerous bike to use in towns. This type of bicycle is becoming more and more popular around the world.

Fixed-gear bicycles are very light. They are built without any unnecessary gadgets, such as chain rings or freewheel hub. When a person rides a fixed-gear bicycle, he/she/they need not put a lot of energy into it as with a geared bike.

Most bicycles have a freewheel so the pedals will stay stationary while the bicycle is moving and so that the rider can ride without pedaling going forward or down a hill. Fixed-gear bicycles have even simpler mechanisms with pedals fixed to the back wheel. That means that the rider cannot stop pedaling. When the rear wheel turns, the pedals turn in the same direction. This allows a cyclist to use a brake by putting a pressure in opposite directions to pedals, so that the mechanism will not rotate.

It also makes it possible to ride backwards, although learning to do so is much more difficult than riding forwards.

All content from Kiddle encyclopedia articles (including the article images and facts) can be freely used under Attribution-ShareAlike license, unless stated otherwise. Cite this article:
Fixed-gear bicycle Facts for Kids. Kiddle Encyclopedia.