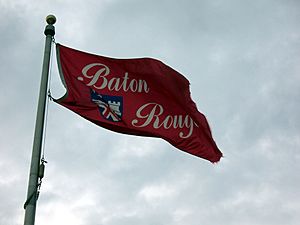 The flag of Baton Rouge flying on a cloudy day.

The flag of Baton Rouge is the city flag of Baton Rouge, capital city of Louisiana. It has a field of crimson representing the great Indian Nations that once inhabited the area. Their red-colored poles erected along the Mississippi River in the area gave the city its name. The crest on the lower left uses the red, white and blue, representing the colors of the United States. The upper left of the shield is the fleur-de-lis representing France, the upper right is the a castle taken from the flag of the Kingdom of Castile, representing Spain, and the lower portion is the pre-1801 Union Flag of the Kingdom of Great Britain. The coat of arms encompasses the emblems of the three European countries whose flags have flown over Baton Rouge. The name "Baton Rouge" in white appears prominently on the field of crimson.

All content from Kiddle encyclopedia articles (including the article images and facts) can be freely used under Attribution-ShareAlike license, unless stated otherwise. Cite this article:
Flag of Baton Rouge, Louisiana Facts for Kids. Kiddle Encyclopedia.