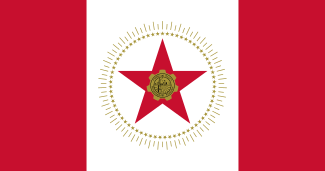 The flag of Birmingham, Alabama, was designed by Mrs. Idyl King Sorsby for the occasion of Birmingham's semicentennial in 1921. It was officially adopted as the city's flag, after some minor additions, on August 18, 1925.

In 2004, the North American Vexillological Association conducted a survey of 450 members and visitors to its website to identify the best- and worst-designed city flags in the United States. Birmingham's flag ranked #39 out of 150 with a mean rating of 4.97 on a scale of 0–10.

All content from Kiddle encyclopedia articles (including the article images and facts) can be freely used under Attribution-ShareAlike license, unless stated otherwise. Cite this article:
Flag of Birmingham, Alabama Facts for Kids. Kiddle Encyclopedia.