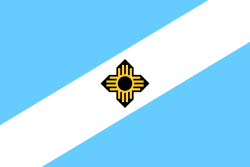 The flag of Madison, Wisconsin, consists of a light blue background bisected from lower left to upper right by a white band. This design symbolizes Lake Mendota and Lake Monona and the isthmus between them. In the center of the flag is a black cross, which symbolizes the four lakes (Mendota, Monona, Wingra, and Waubesa), as well as the cross shape of the Wisconsin State Capitol. Overlaid on the cross is a Native American sun symbol, called the Zia, which similar to the sun symbols on the state flag of New Mexico and the municipal flags of Wichita, Kansas and Albuquerque, New Mexico. The flag was adopted by the municipal government on April 12, 1962. In a 2004 poll conducted by the North American Vexillological Association, the flag of Madison was rated 11th best of 150 major cities in the United States.

All content from Kiddle encyclopedia articles (including the article images and facts) can be freely used under Attribution-ShareAlike license, unless stated otherwise. Cite this article:
Flag of Madison, Wisconsin Facts for Kids. Kiddle Encyclopedia.