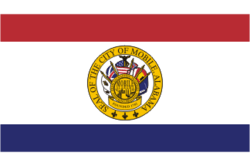 The official flag of Mobile is a flag which represents the seal of the six flags that have flown over the state of Alabama before and since it became a state. The flag was adopted in December 1968 after one was suggested by Commissioner Lambert C. Mims. The original seal which was used in the flag was adopted in 1961.

The flag shows a red stripe moving across the top, a white stripe with the official Mobile seal in the middle and a blue stripe at the bottom.

The flag is Mobile's only ever official flag. The city government has recently thought of taking the Confederate Flag out of the seal, but no changes have been done.

All content from Kiddle encyclopedia articles (including the article images and facts) can be freely used under Attribution-ShareAlike license, unless stated otherwise. Cite this article:
Flag of Mobile, Alabama Facts for Kids. Kiddle Encyclopedia.