Flag of Wisconsin facts for kids

The flag of Wisconsin is the official flag of the U.S. state of Wisconsin. The flag was first adopted in 1863, and was modified in 1979. It is a blue flag charged with the state coat of arms of Wisconsin. 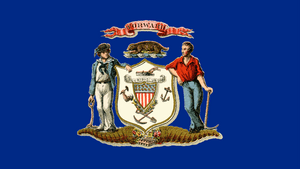 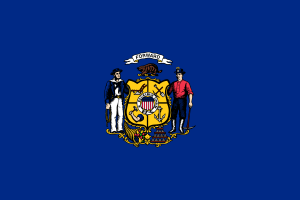 Originally designed in 1866 when regiments from Wisconsin wanted a flag for battlefield use, in 1913, state statutes specified the design of the state flag.

In 1941, Carl R. Eklund reported that he raised the state flag over Antarctica, at the behest of Wisconsin Governor Julius P. Heil, about 500 miles north of the south pole and 620 miles into a previously unexplored area. In 1958, Eklund flew another flag over Antarctica which he presented for display in a state museum.

In 1953, state assemblyman William N. Belter of Wautoma criticized the flag as too costly because of the details.

In 1973, when the state senate was attempting to add the word Wisconsin to the flag, it was criticized as already too cluttered.

In 1975, some state flags were being sold that improperly had the state seal on them instead of the state coat of arms. Wisconsin Secretary of State Douglas J. La Follette noted that the correct state flag did not have the banner of thirteen stars at the bottom.

In order to distinguish it from the many other blue U.S. state flags, Wisconsin's flag was modified in 1979 to add "Wisconsin" and "1848", the year Wisconsin was admitted to the Union. All Wisconsin state flags manufactured after May 1, 1981 were required to use this design.

In 2001, a survey conducted by the North American Vexillological Association (NAVA) placed Wisconsin's flag 65th out of the 72 Canadian provincial, U.S. state and U.S. territory flags. The NAVA stated that about half of U.S. states used blue fields making them difficult to distinguish and the survey ranked flags with words and complex seals the lowest. The NAVA survey "favored strong, simple, distinctive flags" and ranked "seal-on-a-bedsheet" type flags the lowest.

All content from Kiddle encyclopedia articles (including the article images and facts) can be freely used under Attribution-ShareAlike license, unless stated otherwise. Cite this article:
Flag of Wisconsin Facts for Kids. Kiddle Encyclopedia.