A camera flash, sometimes called a strobe or just a flash, is a device used in photography to allow pictures to be taken of dark areas by producing a flash of very bright light. 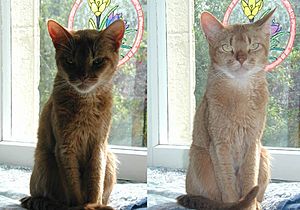 A picture taken of a cat with and without a fill-flash, which is where a subject is lit from behind using normal light and is lit from the front using a flash 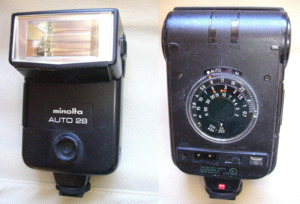 Flashes are often built into cameras, but external flashes are available and are mostly used by professional photographers, they can be mounted directly to the camera, or used 'off-camera' on a special stand or tripod.

Flashes were first used in the late 1800's in the form of a stick with magnesium on the top that when burned would produce very bright light (the stick was held in the air, and the camera shutter released at the same time), later camera flashes used a special type of light bulb known as a flashbulb, and modern flashes use LED's or a special type of tube which emits a flash of mostly blue light when electricity is applied to it from the flash capacitor (known as a xenon flashtube).

The use of flashes is not allowed in some places where it may be annoying to other people or where the bright light could damage rare or very old objects (like paintings) such as in a museum.

All content from Kiddle encyclopedia articles (including the article images and facts) can be freely used under Attribution-ShareAlike license, unless stated otherwise. Cite this article:
Flash (Camera) Facts for Kids. Kiddle Encyclopedia.