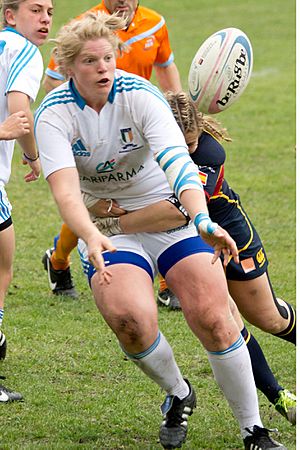 Flavia Severin (born 1 April 1987) is an Italian rugby player and boxer. She was four-time boxing champion of Italy in two weight categories, and finalist in the 2014 European amateur boxing championship. She won a gold medal at the 2018 Women's European Amateur Boxing Championships.

She grew up in Paese.

She plays for the Red Panthers of Treviso.

All content from Kiddle encyclopedia articles (including the article images and facts) can be freely used under Attribution-ShareAlike license, unless stated otherwise. Cite this article:
Flavia Severin Facts for Kids. Kiddle Encyclopedia.