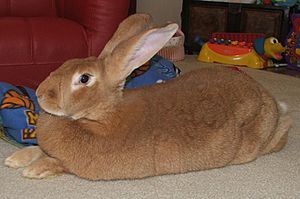 The Flemish Giant Rabbit is one of the largest breeds of domestic rabbits, earning the name, "King of Rabbits." Originally, these rabbits were bred for their fur and meat. It's origins are quite vague. It is believed that these rabbits are descended from the Patagonia Rabbit, possibly crossed with another rabbit. Also, no one is sure as to what region these rabbits are from.

The difference in does (females) and bucks (males) can be told by looking at their head. Bucks have a broader head while does' are dainty and have a dewlap, a fold of skin under their chin, used to keep kits (baby rabbits) warm.

The Flemish Giant Rabbit has other nicknames besides "King of Rabbits." The name "Gentle Giants" was earned because unlike the smaller domestic rabbit, Flemish Giants are known for being much more calm and gentle. They are also called the "Universal Rabbit" mainly for being great pets and show animals, although, it could also be because of their use as a resource for food and material.

"Giant" obviously comes from their large size. "Flemish" was the language spoken in the region where they were being bred. Their large size does mean a bit more of food and maintenance but these rabbits can be taken care of the same way the normal domestic sized rabbits would be taken care of.

Mature Flemish Giants weigh 13-14 lbs on average but they can weigh up to 20 pounds, even a bit more. They can grow to be bigger than some dogs. On average, the Flemish Giant can grow to 2 1/2 in length. The longest Flemish Giant recorded is 4 ft. 3 in. The typical ear length for them is 8 inches.

All content from Kiddle encyclopedia articles (including the article images and facts) can be freely used under Attribution-ShareAlike license, unless stated otherwise. Cite this article:
Flemish Giant Rabbit Facts for Kids. Kiddle Encyclopedia.