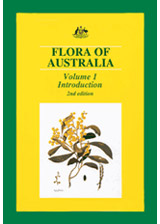 Flora of Australia Volume 1, second edition. All the books in the series have this distinctive green and yellow cover.

Flora of Australia is a 59 volume series describing the vascular plants, bryophytes and lichens present in Australia and its external territories. The series is published by the Australian Biological Resources Study who estimate that the series when complete will describe over 20 000 plant species. It was orchestrated by Alison McCusker.

A few censuses of the Australian flora have been carried out, they include

All content from Kiddle encyclopedia articles (including the article images and facts) can be freely used under Attribution-ShareAlike license, unless stated otherwise. Cite this article:
Flora of Australia (series) Facts for Kids. Kiddle Encyclopedia.