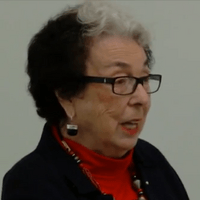 Florence Rosenfeld Howe (March 17, 1929 – September 12, 2020) was an American feminist author, publisher, literary scholar and historian. She was known as one of the leaders of the contemporary feminist movement. Howe was born in New York City.

She taught black children in a Mississippi freedom school during 1964 and chaired the Modern Language Association commission on the Status of Women in the Profession.

In 1967, she signed a public statement declaring her intention to refuse to pay income taxes in protest against the U.S. war against Vietnam.

She was a professor at State University of New York.

Howe died on September 12, 2020 at her home in New York City from Parkinson's disease-related problems, aged 91.

All content from Kiddle encyclopedia articles (including the article images and facts) can be freely used under Attribution-ShareAlike license, unless stated otherwise. Cite this article:
Florence Howe Facts for Kids. Kiddle Encyclopedia.