Foodini the Great facts for kids 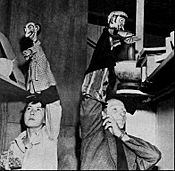 Pinhead (left) and Foodini as performed by their creators, Hope and Morey Bunin, in 1949. 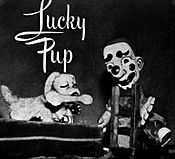 The show was originally titled The Adventures of Lucky Pup, but Foodini the magician and his assistant Pinhead proved to be so popular the show was renamed.

There were Foodini comic books from Holyoke Publishing, as well as records, greeting cards, toys, and magic sets. The comic books are named The Great Foodini, Adventures of Foodini the Great, and Pinhead and Foodini.

The UCLA Film and Television Archive holds several kinescope recordings of this series, including a few episodes from 1948.

All content from Kiddle encyclopedia articles (including the article images and facts) can be freely used under Attribution-ShareAlike license, unless stated otherwise. Cite this article:
Foodini the Great Facts for Kids. Kiddle Encyclopedia.