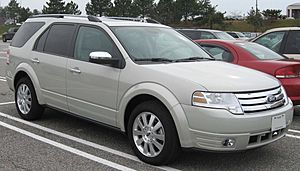 The Ford Taurus X (previously called Ford Freestyle in 2005) was a six or seven passenger crossover that was produced in the United States by the Ford Motor Company. The Taurus X name was phased out in the 2010 model year, and succeeded by the Ford Flex, which overlapped production in the same platform, until it was discontinued.

All content from Kiddle encyclopedia articles (including the article images and facts) can be freely used under Attribution-ShareAlike license, unless stated otherwise. Cite this article:
Ford Taurus X Facts for Kids. Kiddle Encyclopedia.