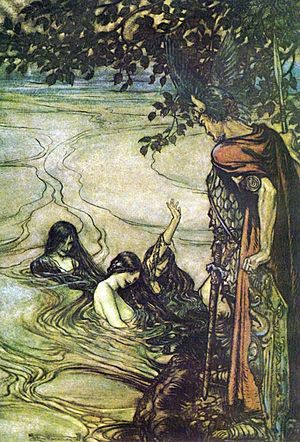 In this Arthur Rackham illustration, the Rhinemaidens warn Siegfried of a curse, foreshadowing the disasters of Götterdämmerung.

Foreshadowing or guessing ahead is a literary device by which an author hints what is to come. It is used to avoid disappointment, and sometimes used to arouse readers.

All content from Kiddle encyclopedia articles (including the article images and facts) can be freely used under Attribution-ShareAlike license, unless stated otherwise. Cite this article:
Foreshadowing Facts for Kids. Kiddle Encyclopedia.