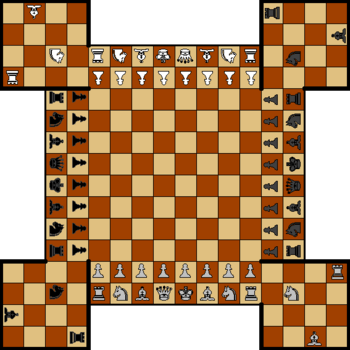 Fortress chess (also called Russian Four-Handed chess) is a chess variant (a kind of chess with different rules) for four players. The board has 192 squares on it.

There are four "fortresses" (the extra parts of the board) in each corner. The fortresses have 16 squares each. A rook, a knight, and a bishop are inside each fortress.

There is no evidence that this chess variant was ever generally played, or even that it was playable. Compare, for example, with the manuscript sources for the old Indo/Arabic version of chess.

All content from Kiddle encyclopedia articles (including the article images and facts) can be freely used under Attribution-ShareAlike license, unless stated otherwise. Cite this article:
Fortress chess Facts for Kids. Kiddle Encyclopedia.