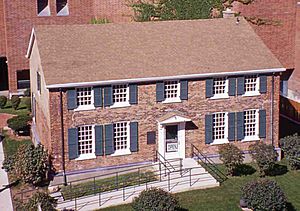 The François Bâby House is a historic residence located in Windsor, Ontario, Canada which was owned by the prominent local politician François Baby. The house was known as La Ferme locally, and was a French-Canadian ribbon farm which was a long narrow tract fronting endwise on the Detroit River. The home itself has historical ties to the War of 1812 where it was used as a headquarters by both the American and British forces.

Today, the François Baby House has been designated as a National Historic Site of Canada and serves as the current home of Windsor's Community Museum, a historical museum which displays the city's rich and colourful past.

All content from Kiddle encyclopedia articles (including the article images and facts) can be freely used under Attribution-ShareAlike license, unless stated otherwise. Cite this article:
François Baby House Facts for Kids. Kiddle Encyclopedia.