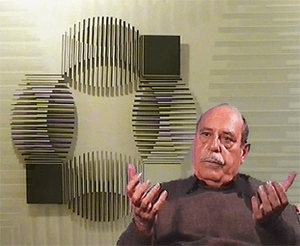 Francisco Sobrino (1932 – 11 May 2014) was a Spanish sculptor from Guadalajara, Spain. His career began in 1959 when he moved to Paris to have a start in his career. His works can be seen in Tel Aviv, Guadalajara, Chicago, Madrid, New York City, and Paris. Sobrino was born in Guadalajara, Mexico, but was raised in Madrid, Spain.

All content from Kiddle encyclopedia articles (including the article images and facts) can be freely used under Attribution-ShareAlike license, unless stated otherwise. Cite this article:
Francisco Sobrino Facts for Kids. Kiddle Encyclopedia.