Frank the Pug facts for kids 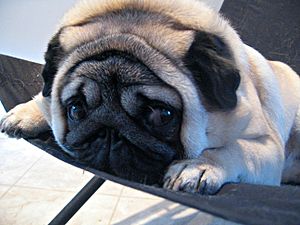 Frank the Pug or Agent F is an alien that poses as a pug and is a character in the Men in Black franchise. He was voiced by Tim Blaney. He has appeared in all but one of the movies.

According to Men in Black II, he is actually a Remoolian.

All content from Kiddle encyclopedia articles (including the article images and facts) can be freely used under Attribution-ShareAlike license, unless stated otherwise. Cite this article:
Frank the Pug Facts for Kids. Kiddle Encyclopedia.