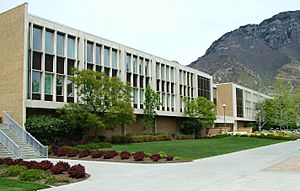 The Franklin S. Harris Fine Arts Center (HFAC) is the main location for the BYU College of Fine Arts and Communications, (Brigham Young University (BYU)), housing most of the college's departments and divisions. It consists of several named areas, as well as an added collection of study rooms, small painting studios, theatre work rooms and some class rooms and faculty offices.

The HFAC is located immediately to the south of the BYU Museum of Art, and just north of the Wilkinson Student Center.

The HFAC was designed by architect William Pereira in the Brutalist style of architecture popular at the time of its construction. The building was inaugurated in 1964.

The HFAC has over 100 rooms of various types, including 53 practice rooms and four art galleries.

The building has seven pipe organs that are considered to be amongst the most notable in Utah, the oldest of which dates back to 1970, although it has since been largely rebuilt.

Following is a list and short explanations of named areas in the HFAC.

The De Jong Concert Hall is the largest room in the HFAC. It is named for Gerrit de Jong, Jr. who was the first dean of the College of Fine Arts at BYU. The hall has a seating capacity of 1269. It is used for most concerts, both by choral groups and symphonic groups as well as many musicals, operas and dance performances. It is also used during the spring and summer terms for the weekly university devotionals. While most concerts at the de Jong are by BYU groups, outside groups such as the Utah Symphony also perform there.

The hall is so central to the school of music's operations that studies aimed at getting ideal sound quality in the hall have been published by the Audio Engineering Society.

The de Jong hall was designed by Harvey Fletcher.

Located right next to the de Jong Concert hall this room is used for rehearsals of student produced operas. It is named for B. Cecil Gates.

This is a three level gallery, most of the space being on the main floor with the two higher floors opening onto the main floor. Besides being used for various art displays, it serves as the lobby for most of the main theatres, such as the Pardoe, the Madsen Recital Hall and the de Jong Concert Hall.

The Larsen Art Gallery is also periodically used as a site for dances.

The Larsen Art Gallery has been used for presentations by the BYU Conservation Laboratory of Fine Art.

The Larsen Gallery is rated as one of the best art galleries in Provo.

The Madsen recital hall accommodates choral group practices during the week. It is also used for solo and chamber productions by students, faculty and even at times visiting groups.

The Madsen Recital Hall was the main location of the 2005 Primrose International Viola Competition, sponsored by the American Viola Society.

This room of slightly more than 700 square feet (65 m2) is designed for short showings of a broad variety of art objects.

This theatre is designed so that seating and acting can occur in any part of the room.

Besides being used for theatre productions, this theatre is also at times used for the College of Fine Arts and Communications Thursday forums.

This theatre seats 509 people and is designed in a tradition proscenium stage setup.

The Laycock Endowment began in 2003 and works to connect students with actual projects for clients, that normally involve inter-disciplinary cooperation. From 2011-2016 the Laycock Center for Creative Collaboration in the Arts (created to house the endowment work) operated as an official center in the College of Fine Arts and Communications. The Center included work for various BYU entities, and a reading application developed for the US Library of Congress.

All content from Kiddle encyclopedia articles (including the article images and facts) can be freely used under Attribution-ShareAlike license, unless stated otherwise. Cite this article:
Franklin S. Harris Fine Arts Center Facts for Kids. Kiddle Encyclopedia.