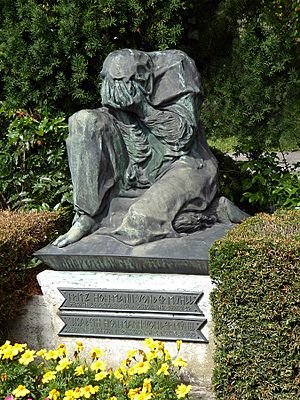 Hoffmann was born in Basel, Switzerland (French: Bâle). His family were wealthy businesspeople from Basel's social elite (called the "Daig"), and they provided both employment experience and investment at the beginning of his business career. He worked for a bank, a pharmacy, a chemicals merchant and a pharmaceutical trader before going into business.

On 2 May 1895, Hoffmann married Adèle La Roche (1876–1938). It was a common practice in Switzerland for married couples to hyphenate the name, so from this point he was often referred to as Fritz Hoffmann-La Roche.

In 1894, he formed a company with Max Carl Traub (1855–1919) called Hoffmann, Traub & Co., which manufactured a limited range of pharmaceutical and chemical products. His father contributed the majority of the capital, and Traub some patents and contracts. In 1896, Traub left the company, and it was renamed F. Hoffmann-La Roche & Co.

According to Peyer (see below), "For his time, Fritz Hoffmann was unusually interested in product promotion and paid attention to all aspects of publicity from simple advertising to packaging and promotion of key individuals such as pharmacists. He also built up international contacts for raw materials and product sales, and supported research. Following the setback of the 1st World War, these factors helped the company to recover and expand. He retired from the board of the company because of ill-health in 1919 and died the following year."

All content from Kiddle encyclopedia articles (including the article images and facts) can be freely used under Attribution-ShareAlike license, unless stated otherwise. Cite this article:
Fritz Hoffmann-La Roche Facts for Kids. Kiddle Encyclopedia.