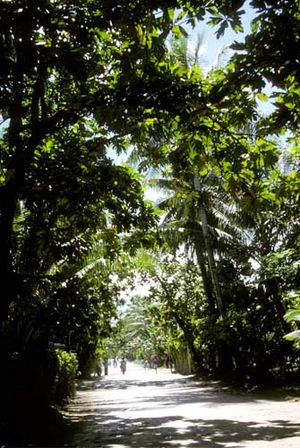 Funafuti is the capital of the small island nation of Tuvalu. It has a population of 4,492 (2002), making it the most populated atoll in this country. It is a narrow sweep of land between 20 and 400 meters wide. There is an airstrip, hotel (Vaiaku Langi Hotel), and administrative buildings, as well as homes, constructed both in the traditional manner, out of palm fronds, and more recently out of cement blocks. The most prominent building on Funafuti atoll is the Church of Tuvalu. Other sites of interest are the remains of American aircraft that crashed on Funafuti during World War II, when the airstrip was used by the American forces to defend the Gilbert Islands (now Kiribati). The United States claimed Funafuti until a treaty of friendship was concluded in the late 70's or early 80's.

The largest island is Fongafale. On this island, there are four villages, of which one is Vaiaku, where the government is. The capital of Tuvalu is sometimes given as Fongafale or Vaiaku, but the entire atoll of Funafuti is actually the capital.

There are at least 33 islands in the atoll. The biggest is Fongafale, followed by Funafala. At least three islands are inhabited, which are Fongafale, Funafala and Motuloa.

Bays and streets in Funafuti

The lagoon surrounded by the atoll is TeNamo. It has a vertical length of more than 20 km.

All content from Kiddle encyclopedia articles (including the article images and facts) can be freely used under Attribution-ShareAlike license, unless stated otherwise. Cite this article:
Funafuti Facts for Kids. Kiddle Encyclopedia.