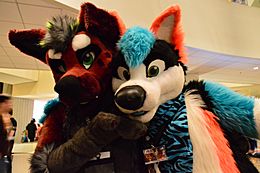 Furry Weekend Atlanta started as an outgrowth of a local furry meetups often held in Atlanta at the homes of various members of the furry fandom. As the gatherings became larger, the idea of formally holding a convention was raised. After several unsuccessful attempts, a plan was made to hold a convention in February 2004. The name Furry Weekend Atlanta was chosen to echo the name of the anime convention held in the city, Anime Weekend Atlanta. The name became a federally registered trademark on December 2, 2008. Originally held around Valentine's Day, the convention was rescheduled to be held mid-March in 2009.

All content from Kiddle encyclopedia articles (including the article images and facts) can be freely used under Attribution-ShareAlike license, unless stated otherwise. Cite this article:
Furry Weekend Atlanta Facts for Kids. Kiddle Encyclopedia.