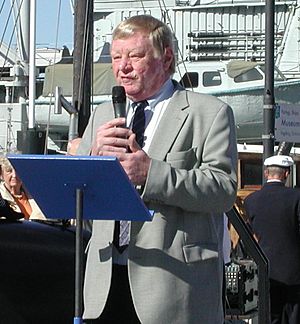 Bengt Göran Lennart Johansson (31 August 1945 – 23 October 2014) was a Swedish politician. He was a member of the Swedish Social Democratic Party.

He was for many years, he served as the chairman (commissioner) of the Gothenburg Municipality Executive Board. With a working class background, he was a union leader at his workplace at SKF and later became the Social Democratic Party's "strong man" in Gothenburg.

Johansson served as Mayor of Gothenberg from 1988 through 1991.

He was one of the best known politicians in Sweden. H has been voted as one of the most popular politicians. But he has also been criticized for an undemocratic leadership which has made several – especially female – politicians leave their assignments within the Social Democratic Party.

Johansson suffered from systemic lupus erythematosus, which caused his face to look swollen and red. He was nominated for the 2008 World Mayor award.

Johansson died on 23 October 2014 in Gothenburg Municipality at the age of 69.

All content from Kiddle encyclopedia articles (including the article images and facts) can be freely used under Attribution-ShareAlike license, unless stated otherwise. Cite this article:
Göran Johansson Facts for Kids. Kiddle Encyclopedia.