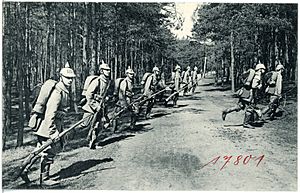 The G98 Mauser rifle is a bolt-action rifle used by Germany from 1898 until the end of World War I. It was the German military's main rifle during that time. In 1935, it was replaced by Kar98k, a carbine version of the G98.

The rifle held up to five 7.92 x 57mm Mauser rounds. It was also clip-fed, which means that the shooter can load many bullets at one time, rather than just one bullet at a time.

All content from Kiddle encyclopedia articles (including the article images and facts) can be freely used under Attribution-ShareAlike license, unless stated otherwise. Cite this article:
G98 Mauser rifle Facts for Kids. Kiddle Encyclopedia.