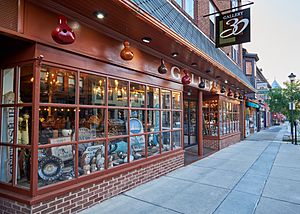 Street View of Gallery 30 in Gettysburg 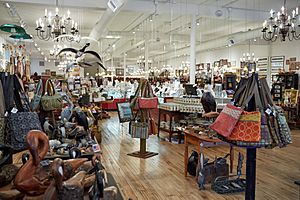 An interior photograph of Gallery 30 in Gettysburg, Pennsylvania

Gallery 30 is an American fine art and craft gallery located in Gettysburg, Pennsylvania, United States. Gallery 30 has occupied two historic buildings in downtown Gettysburg, and its ownership has been active in the local community since the gallery's opening in 1979. Gallery 30 specializes in American fine art and artisan crafts with an emphasis on local and regional art; some of Gallery 30's most notable artists have included Wendy Allen, Janet Walsh and Metro the Painting Racehorse.

Gallery 30 opened in October 1979 when watercolorist L. Chris Fick and former Gettysburg College professor Elizabeth “Betty” Martin partnered in a venture that they called a “half bookstore, half gallery.” The women named their business “Gallery 30” in honor of its location at 30 York Street in downtown Gettysburg, Pennsylvania. Gallery 30 opened with a small selection of paintings, photographs and sculptures by local and regional artists and about 4,000 books. The book selection spanned many literary genres but focused primarily on children's literature, reflecting the owners’ appreciation for the art of illustration.

In June 1988, Gallery 30 was acquired by former music teacher and Kansas native Rodney Gisick. Although previous owner Betty Martin continued to be involved with Gallery 30's book department in an advisory capacity, Gisick took Gallery 30's selection in a different direction with the launch of a literary project that he dubbed “Man to Man Books.” By 1992 Gisick had compiled “the largest catalogue of men’s studies books available” in the United States, prompting one publisher to call Gallery 30 “the men’s bookstore for the nation.” During his time as owner, Gisick also made changes to Gallery 30's art department, adding handcrafted gold and sterling silver jewelry and more contemporary artisan crafts.

In May 1993, Gallery 30 and its historic building were purchased by Washington, DC government relations consultants Lois Starkey and Bill Gilmartin. The new owners shifted Gallery 30's primary focus from books back to local and regional art and further diversified the gallery's collection of artisan crafts. Throughout the 1990s, Starkey and Gilmartin also concentrated on deepening the business's roots in the Gettysburg community by regularly hosting book signings, art contests and other family-friendly events.

The historic 19th Century building that originally housed Gallery 30 is located at 30 York Street, also known as US Route 30 and the historic Lincoln Highway, in Gettysburg, Pennsylvania. The brick building bears an official plaque that verifies it as a Civil War building that was standing during the Battle of Gettysburg in 1863. In fact, the building was erected in the early 1800s by Gettysburg merchant John Hoke, the proprietor of a store offering dry goods and groceries. In 1858, J.C. Guinn took over Hoke's Store and continued to operate it “on an enlarged scale.” In 1866, the store changed hands again when it was purchased by J.A. Grimes who called his business a “family grocery and variety store.” Nicholas Codori acquired the building in 1867 and started a butcher shop with his son Simon J. Codori. In 1906, the Codori family abandoned the butchering business in order to open a garage in another York Street building and form the Citizens Oil Company. By the early 1920s, Gettysburg merchant Harry Viener had acquired 30 York Street and was operating a store specializing in ready-made clothing. In 1953, Harry Viener's Store was sold to brothers Martin and Charles Redding and was reopened as Redding's Supply Store. Redding's Supply Store remained in operation until 1979.

In 1979, Chris Fick and Betty Martin acquired the 6,000-square-foot building at 30 York Street and renovations were undertaken in order to create a more light-filled space prior to Gallery 30's opening. Several 6-feet tall by 8-inches wide window panels were added to the east side of the brick building, and the interior was opened up to make way for a shiplap structure to be installed through the center of the space. Gettysburg contractor Robert Crouthamel was hired to construct a small house inside the building to serve as Gallery 30's children's book department. Gallery 30's logo and storefront sign were designed by architect Fred Harle of Mechanicsburg, Pennsylvania; the logo consisted of a white numeral 30 oriented at a 30-degree angle on a green background.

When Lois Starkey and Bill Gilmartin acquired 30 York Street in 1993, they made several architectural changes including enclosing the building's back porch in order to add windows and square footage to Gallery 30's retail gallery space. In 2007, Linda Atiyeh acquired 30 York Street. Atiyeh continued to operate Gallery 30 at its original location, making only minor architectural adjustments to the building's interior.

In 2012, Linda Atiyeh purchased the 16,400-square-foot building located at 26-28 York Street with plans to relocate and expand Gallery 30. This historic building began life as Walter's Theater; at the turn of the 20th Century entrepreneur John F. Walters, who had had great success with a small “moving picture business” on Baltimore Street in Gettysburg, decided “to erect a larger theater, complete with stage on York Street.” Walter's Theater regularly hosted picture shows, community theater events, singers and traveling vaudeville acts. The theater created a stir in 1910 when it featured a “real burlesque show” called “Monte Carlo Girls” live on its stage. The graduation ceremony for Gettysburg High School's class of 1917 was also held at Walter's Theater, with those in attendance taking special notice of the patriotic decorations hung throughout the auditorium in support of the American troops in World War I. In 1917, Richard H. Humphries of Philadelphia became the manager of Walter's Theater, changing the theater's name to the Lincoln Way Theater.

In 1927, E.L. Weikert acquired the Lincoln Way Theater, remodeled the building into an auto garage and opened a Hudson-Essex dealership called E.L. Weikert Motor Car Company. In 1931, Weikert sold the building to Luther Sachs, who opened Luther I. Sach's Hardware Store. Sach's partnered with the Adams County Market-Growers’ Association in 1935 to create an indoor farmer's market in the rear section of his hardware store; thirty-three individual stalls were rented to local farmers at a rate of $25.00 per year.

In the years that followed, 26–28 York Street was home to a number of different businesses, including H. G. Armistead Five and Ten Store, J. Louis Schultz Insurance and The Blind Center Shop. The Blind Center Shop was opened in 1949 by Cletus A. Wertz, a Gettysburg man who was blinded in an accident “several years” before. The shop carried leather and plastic products, including purses and belts, that were hand-laced and assembled by Wertz, who lived and worked with the assistance of his seeing-eye dog Dolly.

Throughout its history, Gallery 30 has endeavored to give back to the local community in Gettysburg, Pennsylvania. Gallery 30's founders often held book signings, film screenings, slideshows, lectures and art exhibitions that were open to the community free of charge. Under the direction of owner Rod Gisick, Gallery 30 began hosting larger artistic events, including the Annual Loretta Chris Fick Memorial Art Show and Reception and the First Annual Pennsylvania Artisans Show.

In 1993, owners Lois Starkey and Bill Gilmartin instituted a free children's story hour, occasionally featuring readings by local authors, held weekly at Gallery 30. Throughout the 1990s, Gallery 30 supported fledgling community organizations such as Main Street Gettysburg and Gettysburg Area Retail Merchants Association. Gallery 30's ownership was also instrumental in the formation of the Adams County Arts Council and the History Meets the Arts Exhibition, “a multi-faceted cultural event held annually in Gettysburg to showcase our nation’s prominent historical artists in an up-close, personal setting.” Gallery 30 was involved in Downtown Gettysburg's inaugural First Friday event in 2002 and continues to celebrate First Friday to this day with extended hours, featured artists, book signings and refreshments on the first Friday of each month.

Gallery 30 also represented Metro the Painting Racehorse from 2012 to 2016. Metro Meteor was “once considered one of the fastest sprinters on the east coast, winning eight races and more than $300,000 at Belmont and Saratoga; that is until knee crippling injuries ended his racing career and almost ended his life.” In 2009, Gettysburg artist Ron Krajewski adopted Metro off the track and first gave the horse a paintbrush. Metro started making broad strokes against a canvas, and soon the horse was painting with Krajewski every day. Half of Metro's profits from the sale of each painting are donated to New Vocations Racehorse Adoption Program, “an organization that retrains and finds new homes for retired racehorses.” As of July 2015, Metro had raised over $80,000 for the charity.

All content from Kiddle encyclopedia articles (including the article images and facts) can be freely used under Attribution-ShareAlike license, unless stated otherwise. Cite this article:
Gallery 30 Facts for Kids. Kiddle Encyclopedia.